A Visit with Ernie Pyle – the GI’s War Correspondent

A memoir by Jack McGouldrick

Although World War II had all but ended in Europe, my unit was still engaged in combat in the Pacific. The jaws were closing on the Japanese Empire though as the battle had moved onto their territory – Okinawa.

On this particular day, three of us had a day off from flying out of our field on Guam, so we piled into a Jeep and drove to the beach – still littered with the offshore remnants of that island’s invasion. Another Jeep soon joined ours. The driver appeared tired and somewhat older than his years.

He introduced himself as Ernie Pyle, quickly adding “Just Ernie.” The most celebrated war correspondent of WWII then sat down with us.

With a reporter’s ease he quickly gained from us our individual military histories, up to but not including shoe size. None of us knew whether Ernie was conducting an interview for use in a story or if this was just the start of a pleasant conversation on a Pacific beach.

We asked the 44-year-old native of Indiana how he came to find himself in the Pacific.

Ernie recalled as a new war correspondent he soon realized that the practice seemed to be reporters attended the same press conferences then tried to create a unique news angle from the briefing. Ernie said he resolved to be different. His tactic would be to travel with the GIs – telling their story.

GI may be a familiar term, but many are unaware of its origin. It stood for Government Issued. We civilians had signed a contract for the duration of the war plus six months. We quickly learned that our souls were our own but our bodies belonged to Uncle Sam.

Ernie’s time with the GIs began in the war’s Mediterranean Theater with the invasion of North Africa. He ate when and what the infantry ate, slept when and how they slept, sharing a foxhole only armed with a portable typewriter. He shared every danger.

His assignment decision had an unexpected consequence. He developed a genuine affection for these weary, dirty, unshaven men in filthy uniforms who fought the war.

Ernie visited us for a couple of hours, sharing the causal soldiers’ conversation sprinkled with humor that only people who have faced a common danger would appreciate. As we became more comfortable with our celebrated guest, one of us asked Ernie why he’d made the trip to the Pacific War? “You’re a civilian. After what you have been through — you’ve paid your due a hundred times.”

The question was met with silence.

Belatedly, we realized the question had changed the mood of the visit. When he finally spoke, the answer obviously was not one lightly reached.

“I had no choice”, he said quietly.

He then explained his decision through a comparison of the war in Europe and the war in the Pacific.

Pyle described the European theatre as a crusade to liberate the continent from the German Nazis and Italian fascists. Discounting the cost in causalities and displacement paid there was a sense of accomplishment that was unparalleled.

The war in the Pacific on the other hand was the United States’ war. The Japanese, in bombing Pearl Harbor without warning, had made it personal. The single objective was the defeat of Japanese aggression. No victory parade or cheering citizens — only the end of a tremendous challenge.

He said Americans could identify with war fought across Europe. They could visualize the liberation of Paris with its iconic Eiffel Tower. Such geographic reference points were absent in the Pacific with unfamiliar locations, like Iwo Jima or Guadalcanal.

Ernie stopped talking, realizing the three of us understood his decision. How could Ernie Pyle stop at half a war.

After following GIs across North Africa, up the spine of Italy, and across France after the D-Day invasion of Normandy, how could he fail to record the gallant efforts of those soldiers fighting this alien war across the vast Pacific?

We nodded unable to verbally respond — Ernie stood, shook our hands, wished us a long life and departed. We silently and thoughtfully remained awhile.

History tells of many who ascend to greatness through writing and oral skills. The stories of those who possessed these skills and whose only desire was to gain recognition for others is rare. This was the greatness of the man we had the privilege of meeting on that beach. Ernie Pyle earned the gratitude and loved buddy status of the common solder serving our country.

Soon after our beach conversation, Ernie went on to Okinawa where a Japanese machine gun bullet took his life on tiny, nearby Ie Shima.

The fitting ending to this story is a crudely printed wooden sign erected on Okinawa by the GIs.

On This Spot The 77TH Infantry Division Lost a Buddy

Donations to the Museum

It is an exact replica of the Coleman stove that was presented to Ernie Pyle, by the Coleman company back in September of 1944.

It is proudly displayed in our museum, the Friends of Ernie Pyle Museum and Board members personally want to thank them! 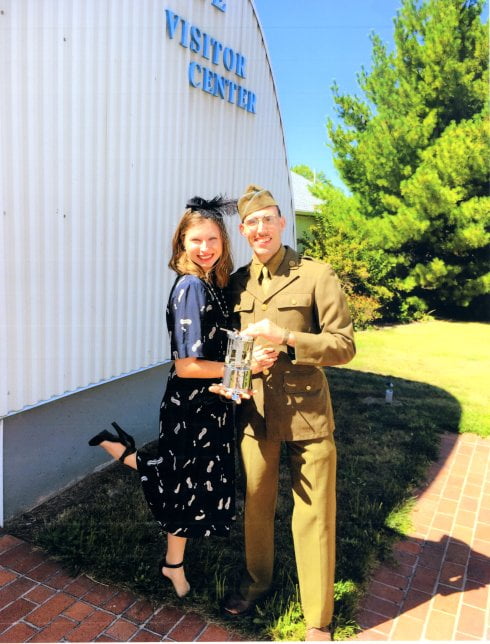 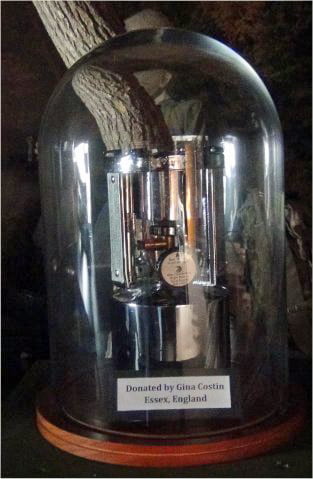 Below is a picture of the article written by Ernie Pyle, Sept 4, 1944 where he talks about his Coleman 520 stove. 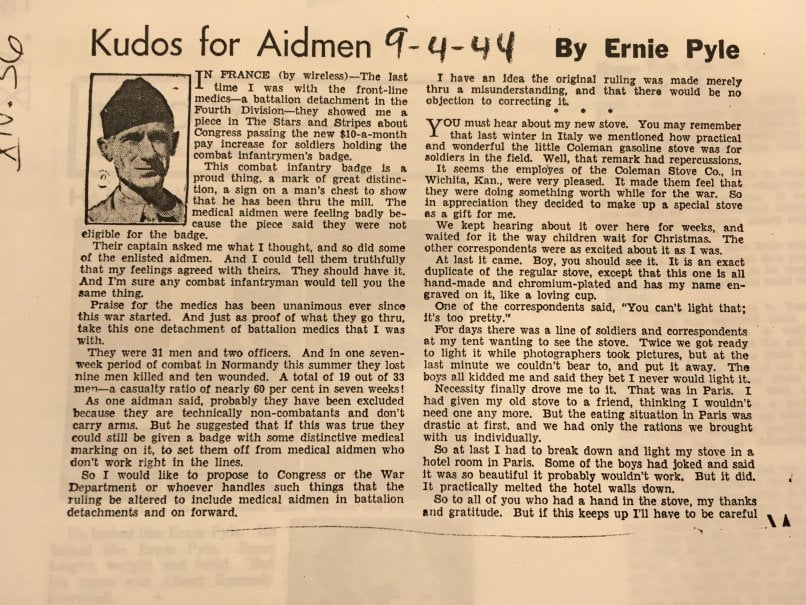